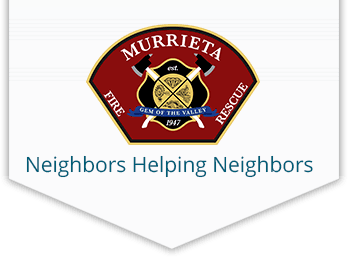 On April 16, 1947, the citizens of Murrieta voted to form the Murrieta Fire Protection District. With $1,400 donated by the community, the Fire District purchased a 1941 International 4 by 4 crash truck. At the toll of a bell atop the Methodist Church, the 10 Fire District volunteers responded to 6 calls that first year. The original station was located behind the Murrieta Machine Shop.

The plaque on the wall commemorates the date of the first Firefighters Barbecue and the completion of the original fire station. The Fire District was responsible to a three-member elected Fire Commission.

With a desire to meet the increasing demand for fire service in the Murrieta Valley, we purchased an additional 4 by 4 crash truck in 1957. In 1966, the volunteers built a 500 GPM pumper on a 1957 GMC frame carrying 800 gallons of water. This pumper was later donated to a small town in Mexico.

In 1965, the voters of Murrieta approved a $30,000 bond to build a new fire station at the present location of Fire Station Number 1. Albert Edmonds donated the land for this site to the Fire District. In 1989, this station was enlarged from the original two bays to a four bay station with Fire District offices and expanded crew quarters and sleeping quarters. In 1970, a 1 ton Chevrolet truck was purchased and outfitted as a quick attack for vegetation fires and a medical squad.

A 1954 GMC Van Pelt with a 1,000 GPM pump was purchased for $1 from the Office of Emergency Services. This engine is still owned by the district but not in active service. In 1985, the Fire District purchased a 1984 Emergency One 1,500 GPM pumper, which became our first-run engine. During this period, three 2 1/2 ton military 6 by 6 trucks were outfitted with pumps and 3,208 cat diesel engines and are in service as brush trucks.

Growth of the Fire Station

In years after 1987, the Fire District area experienced tremendous growth. Since 1987, approximately 15,000 homes and apartments have been built or are under construction in Murrieta. We estimate our population to be approximately 43,000, we are growing by approximately 200 residents per month. The majority of the early growth occurred east side of Interstate 15; now, growth is concentrated in the north-west area of the City.

Anticipating this growth, the Fire District, in late 1988, purchased two additional 1,750 GPM pumpers and a 95-foot Aerial Platform Quint. With the continued pace of growth at the fire district, we purchased two 1990 1,750 GPM pumpers and an additional 1990 Aerial Platform Quint. Up to October 1993, the Fire District had in service to the Murrieta Community and, Riverside County, through Automatic and Mutual Aid agreements, six pumpers, three brush trucks, two 95 foot aerial platforms and a rescue squad. Station One and Two and Three were in full operation.

Each station was manned seven days a week, 24 hours a day with a 4-man paid engine company. One 95 foot aerial platform was staffed 24 hours per day at Station One. The squad, two engines, and two brush trucks were staffed by volunteers from Station One. Two engines and one brush truck were staffed by volunteers from Station Two.

The personnel within the Murrieta Fire District had undergone similar growth in recent years. Late in 1987, we changed from an all-volunteer Fire District to a combined career and volunteer staffed Fire District. On July 9, 1990, we were the first Fire Department in Riverside County to implement the Emergency Medical Technician - Defibrillator (EMT-D). A defibrillator, capable of restoring to normal an abnormal heartbeat usually associated with heart attacks, is located on each paid engine company. Many lives have been saved by this program.

The two 1990 Engines and Aerial Platform were returned to the dealer. In November 1997, due to growth recurring in Murrieta, the Fire Department was able to add three firefighters to Station Number 2, providing a staffing of three on Engine Number 2. During the 1999 to 2000 fiscal year, additional firefighters were added and the Department now has three personnel, including a firefighter/paramedic, on each engine at all times.

In the fall of 2005 the Department opened Fire Station Number 4 in the northern portion of the City. We currently employ 48 personnel at four stations and the administrative offices. American Medical Response paramedic ambulances are located at Stations Number 2 and Number 3.

The Murrieta Fire Protection District is involved in several community events during the year. The signature event is the "Old Fashioned Pit Barbecue" held each April since 1948. The first barbecue was attended by 300 people and served 300 pounds of beef. We now serve approximately 2,500 people using over 2,000 pounds of beef.

The Barbecue serves as a meeting place for local townspeople and their families. People may look at the fire station, equipment and meet the Fire District members that will be responding in the event of an emergency. Several antique fire engines and cars were be on display.

Please feel free to contact the Fire Department should you have any questions or comments at 951-304-3473 (FIRE).