No Shame, No Blame

The Safely Surrendered Baby Law allows a person with legal custody or a parent who is unable or unwilling to care for an infant 72 hours of age or younger, to confidentially surrender the infant to any hospital emergency room or designated fire station. All Murrieta Fire & Rescue fire stations are safe surrender sites. The purpose of this law is to protect infants from abandonment and also to protect the parents from arrest or prosecution for abandonment, as long as there has been no abuse or neglect.

Under the law, the parent or guardian surrendering the baby does not have to give any information about the baby. If the parent or guardian so chooses, they may answer just a few questions about the medical history of the baby. This ensures proper care or treatment can be found if needed. Firefighters at the station will issue a matching coded wrist bracelets. One of the wrist bracelets must be taken by the parent or guardian in order to reclaim the baby should they change their mind. The firefighters at the station will ask for the date and time of birth and the surrendering party’s name and the infant’s surname (last name). Providing this information is strictly voluntary.

The Safely Surrendered Baby Law (Senate Bill No. 1368) was implemented on January 1, 2001, in response to the increasing number of abandoned baby deaths in California, as reported by media accounts. The law is intended to spare the life of an infant by encouraging parents or persons with lawful custody to safely surrender an infant at a "safe surrender site" within 72 hours of the child's birth rather than abandoning them in an unsafe location. In October 2005, Governor Schwarzenegger signed legislation extending the Law permanently, effective January 1, 2006.

Babies who are safely surrendered at a hospital are given medical treatment and placed in a foster home or pre-adoptive home. A parent or person with lawful custody has up to 14 days from the time of surrender to reclaim their baby. In addition to California, and all 50 states have such laws in place to discourage baby abandonment. 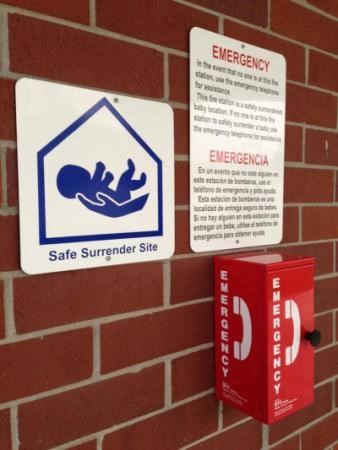